Once the streets of villages, towns and cities would have been thronged with delivery boys on bikes like his. Every small business would have had at least one, the baker sending out fresh bread every day, the butcher delivering his meat, the grocer sending out his goods to households in the area.

The post office must have had thousands of similar bikes, their post boys as young as twelve racing between the carriages and carts delivering the afternoon post which had been popped in a letter box just that mornign. Heavy and unwieldy they may seem to us, but for businesses and their employees this was the ultimate in speedy, economical and healthy transport! 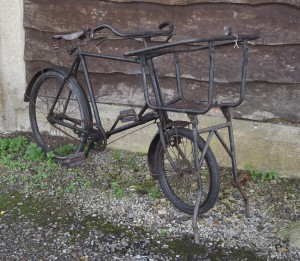