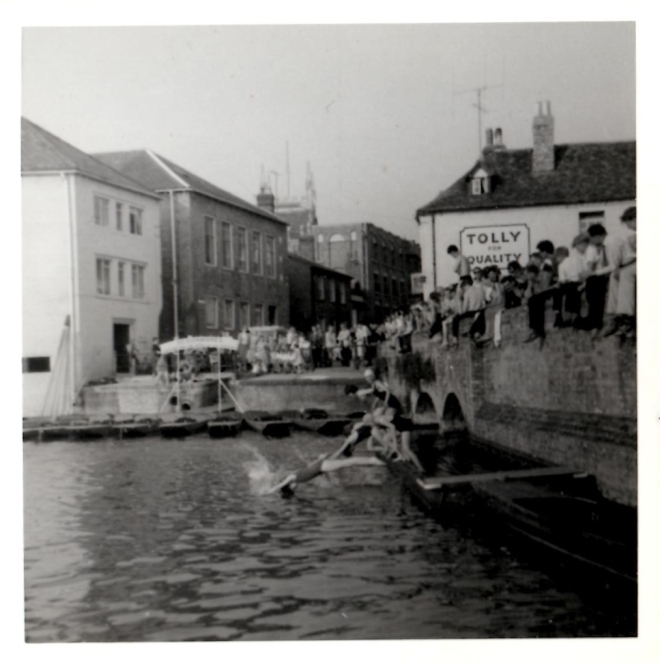 The swim through Cambridge

My sport was swimming, and my sister and I were proud to belong to the Granta Swimming Club, both swam for the club and for the county. An annual event that many of the club members took part in, as well as other swimmers, was the Swim Through Cambridge, which was exactly what the title suggests, a race swimming along the backs of the colleges from the Mill to just before the lock.
We took part every year, and I never won… I came 2nd, I came 3rd, I came 5th, but I never won! The course was about a mile long, which was nothing to us in those days when we trained swimming miles and miles every week. There were other river races, a three-mile and a seven-mile, and there may have been a five-mile… I did win a couple of those! However, as they say, it wasn’t the winning but the taking part.

I loved the river, the water had a particular feel to it… before it was polluted by effluent, fertilisers draining off the fields and other rubbish and muck. There were weeds,long green and slightly slimy, but not unpleasant. There were ducks, but not many swans along that part of the river, and although there must have been fish, I don’t remember feeling any.

I haven’t managed to find out any information about the swim, when it started, although I think it was stopped in the 1980’s. I don’t know if the race took place in the thirties when my dad was sure to have taken part in it. My stroke was backstroke, so although I swum on my front, for a lot of the race I would swim on my back and be able to see the colleges and the bridges, and all the people cheering us on.

In my featured image, you can see me diving in, nearest the camera, my head is tucked down, maybe too tucked down, but otherwise it looks a pretty good dive!

The end… me and Deborah Yoffe who is wearing the cap – I hated caps and always swum bare-headed, and my sister with my dad walking proudly beside her.