There is a little saying in our family, when one of the others is going on about something serious or boring, or serious and boring, “I like jelly!” 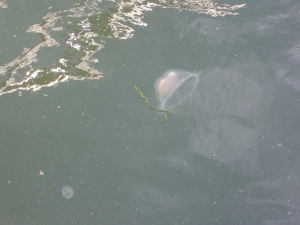 I like jellyfish… I think they are incredibly beautiful and interesting – at a distance! I have actually eaten jellyfish, and thought it interesting, an unexpected texture and a somewhat subtle flavour. I’m not keen on being physically near them, too many memories of being stung as a child when we went swimming in the north sea… my dad used to  rub raw tomatoes on the stings; he said it was what Arab people he had met in North Africa during the war did.