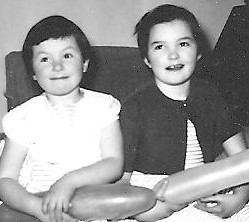 A shared moment in time

When I was at infant school there was a little girl in my class called Athalia Keet… this of course is not her real name. Her real name was extremely unusual and I have never heard anyone use it since, but it was a very pretty name and if my husband had not objected I would have given it to my daughter!

My family was not a well-off family, we lived in a rented flat, my dad grew nearly all our vegetables and my mum made nearly all our clothes. However, I think I knew even at the age of 5 or 6 that Athalia came from a poor family. She was a small, thin child, with long mousey hair, pinned to one side with a clip. She often put her head on the table and went to sleep. She was pale and quiet and I don’t remember speaking to her or playing with her though I think I must have done. I don’t remember her further up the school so maybe her family moved away.

I have always remembered her, remembered the image of the small, pale, tired, child sleeping at her school desk. Not long ago, while doing my family tree research one day, I idly looked up her name in the marriage records; I wanted her to be married and happy and I found her. She married at the age of 17 in the spring time… I was in my first year of studying for A-levels, in the second term of the two year course… marriage would never have even crossed my mind, but Athalia married 22 year old Geoffrey Jordan… again this is not his real name.

Not long after Athalia and Geoffrey married, they had their first child, Samuel Reuben in September. I had spent my summer doing my exams and then working as a waitress in a local hotel. The next year they had their second child, Billy. While I was struggling away doing my final school exams, Athalia was looking after her two little babies.

I went to Manchester Polytechnic to do a degree in English and History with French as a subsidiary subject. What fun I had! I fell in with a great group of friends, worked hard, played hard, danced, drank, loved and lived! I finished my first year at the Poly in June as Athalia had her third child, Salome. While I spent my summer waitressing and then in France, she was caring for her three children, all under three.

I really enjoyed my time as a student; I studied fairly conscientiously and enjoyed the subjects I was studying. I had some wonderful lecturers and tutors and many of my contemporaries were streets ahead of me in intellect and intelligence which was exciting and stimulating.

I finished my degree, handed in my dissertation and waited anxiously to know whether I had actually passed. I’m not great at exams, a sort of mental paralysis comes over me and I misread questions, wrestle with a blank mind and try to keep panic at bay. I passed!

I took time out and worked in a charity shop and then joined the Civil Service and was back in Manchester in the autumn. Meanwhile, in the early spring of that year, Athalia had another son, David and then barely nine months later, just before Christmas, she  became the mother of twins, Marilyn Charlotte and Anthony Paul… six children, six! The oldest was only 4… and I was swanning about with money in my pocket, carefree and single.

I left the Civil Service before I became fossilised by boredom and worked at Manchester Airport. It was a wonderful job; I loved the shifts, I loved the fact that the airport was alive 24 hours a day, that it was like a little village with thousands of people working there… Athalia had her seventh child, Elijah Mark…

It was twenty-one years later before I was married and had my two children… Athalia and I, we shared a moment in time and then our lives followed such different paths. I hope she is happy and loved as I am.