Ever since I was a tiny child I have worn a poppy on Poppy Day. Poppy day, November 11th, is the day we remember those who have fallen during the two world wars although I believe other men and women who have given their lives or have had their lives affected by military service in other theatres of conflict are supported by the money raised. When I was a child the poppies were on a wire but now they are on a plastic stalk which is forever falling out of a buttonhole or becoming unfastened by its pin.

The idea of a connection between poppies and war was first made in a public way by the poem ‘In Flanders Fields’, written in 1915 by Lt Col John McCrae, a Canadian who served in World War 1. However it wasn’t until 1921 when the British Legion (now the Royal British Legion) was founded and ordered nine million (yes, 9,000,000) red silk poppies which were sold to raise money for veterans of the conflict. Ever since November 11th has been Poppy Day.

Out and about in Richmond, Surrey at the beginning of the month we came across the Poppy Factory – I had never considered where they might have been made, but here was the factory where poppies have been made for over ninety years. I was quite moved to see it, and will think of the men and women who work there every time I buy a poppy in the future. 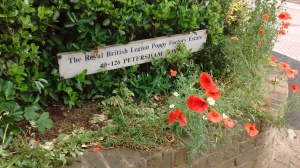