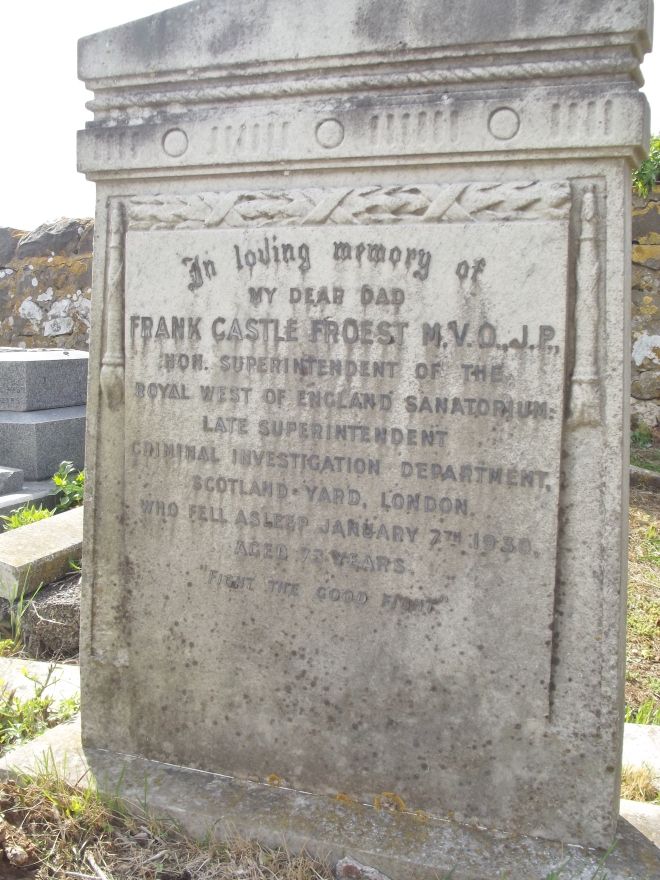 I have just started reading a novel – a police procedural by an actual police superintendent, and I am really enjoying it. I’ve been worried that I’ve become a fussy reader, well, maybe I have, or maybe I need easier reading than I used to be able to enjoy, and a nice detective story is just my cup of tea.

The author of the book I am reading is Frank Froest; his name may not be very well-known but one of his investigations is still remembered today. Frank died in 1930 and is buried in the churchyard overlooking our village – keeping his eye on things no doubt, and as his most famous case involved a trans-Atlantic voyage, maybe it is appropriate that if he looks the other way he can look out and the next land he will see, beyond Ireland is the USA.

He was in charge of the investigation into the notorious Dr Crippen, and members of his team were on board a fast liner taking them across to Canada where they landed before the murderous doctor and his girl-friend Ethel le Neve, and arrested them when they docked.

Although written nearly a hundred years ago, and despite the massive advances in police technology and scientific investigation, the book, so far still reads well, and the police far from blundering into the crime scene and mess up any evidence, wait outside the door of the room where the murdered man lies, waiting for the executive chief of the Criminal Investigation Department, Heldon Foyle to appear. here is how Froest describes Foyle:

He put the phone down and began to dress hurriedly but methodically. He was a methodical man. Resolutely he put from his mind all thoughts of the murder. No good would come of spinning theories until he had all the available fact… He rarely wore a dressing gown and never played the violin.

When Foyle gets to the scene of the crime this is the ‘little cluster of grave faced men’ who awaited him:

Sir Hilary Thornton, the assistant commissioner… Professor Harding, an expert retained by the authorities and a medical man whose scientific researches… had sent a man to the gallows; Grant of the finger-print department; a couple of men from his department gearing cameras and lastly the senior officer of the CID, green and his assistant.

Buried in the churchyard of our old village church is a man who was involved in the arrest of Dr Crippen, the man who murdered his wife for love of a young woman.  More of Dr Crippen another time, but I wondered how detective Inspector Frank Castle Froest came to be buried in our little village, overlooking the Bristol Channel.

The Grell Mystery by Frank Froest

This seems very similar to the sort of team which would gather at a crime scene today… here is something I wrote a couple of years ago about Froest:

It seems he was born in Bristol, or in the Bristol area and ended his life as a superintendent of a sanatorium in Weston-super-Mare, the town just next to Uphill.

I tried to do some research about Frank but census returns and other documentation seem  unable to yield much… maybe his name was sometimes misspelt as Frost, I know sometimes it was Fro’est. However I did find out that he travelled a great deal and as yet I’m not sure why, maybe as part of his work as a police officer:

Frank married Sarah Jane Carpenter at Lewisham in 1880 and probably had two children, Frank Egbert Froest who sadly died aged 16 in Long Ashton near Bristol, and Mabel Mae who married and had three children.

The only other information I have on Frank is a census return for 1911 when he is living on Streatham Hill with Sarah, and a servant (from Bristol) and his occupation is Superintendent, of the  Criminal Investigation Office. He died in 1930, aged 73 in Weston, and now lies looking over the town and out to sea, an appropriate resting place.