Ships That Pass in the Night … 2

Having shared a diary my dad and his friend kept while on holiday in 1937, I’m now reposting some entries from a diary my mum and her sisters kept during the war:

My mum and her sisters kept a diary during the early years of the war, recording the young soldiers stationed near their home in the village of Harston, who their mother invited to tea. The sisters were only young at the outbreak of the war, 13, 15 and 19, their brother was in the RAF and their father fifty had joined up again to serve his country.

Here is an extract from their diary: 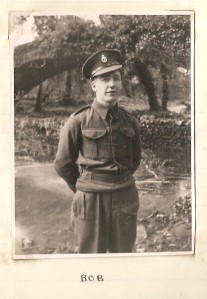 On the evening of the 6th June 1940, Beryl and Monica were standing at the gate when a soldier came along and said “Haven’t I seen you somewhere before?” The girls were rather surprised at this form of address, but after chatting with him for some minutes decided he had. This was Bob. The first soldier we knew.

Learning he had spent most of the winter in France and was invalided home after a motor cycle accident there, Mother invited him for supper that evening and after that he just lived here, and really made it his second home. We were very glad to welcome him. He used to come in each evening for supper and on Sundays for sinner, tea and supper, and a sleep on Sunday afternoon.

We had told Bob we never heard the sirens when they sounded and about 11 o’clock on the night after we met him, when we were all in bed we heard a scrunching of stones on the drive and tramping of Army boots and there stood Bob, come to tell us the warning had gone.

We all hung out of the bedroom window chatting to him until the “All Clear”. Fortunately it was a short warning and a warm night, otherwise we might all have caught cold, being robed only in our night attire. We only hope he didn’t notice our hair curlers!

Bob was a territorial and was called up before the outbreak of war. In civil life he was taking an engineering course at a Technical School.

We didn’t actually say Goodbye to Bob, as the whole Company left at about 7 o’clock one morning and we didn’t know he was going until about 10 o’clock on the previous evening, but we were all at the gate early that morning and waved his Goodbye as he went off on his motor cycle.

Bob often writes to us and we are always glad to hear from him.

This is so charming and sweet; Bob was only 18 and already he had served in France. You can imagine how glad he was to be in a family, the only contact with his own would have been through letters and that’s not the same as sitting round after Sunday lunch and having a snooze before tea! I can just imagine the young girls, 20, 16 and 15 with their heads stuck out the window talking to the nice young Welsh man on the drive, and then the poignancy of watching him wave as he rode away to an uncertain future.