Ships That Pass In The Night – 5

I’m sharing a series of diary entries my mum and her sisters made during the war: 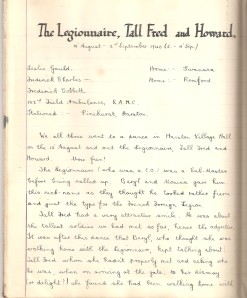 We all three went to a dance in Harston Village Hall on 10th August and met the Legionnaire, Tall Fred and Howard. More fun!

The Legionnaire (who was a C.O.) was a tall Cub-Master before being called up. Beryl and Monica gave him this nick-name as they thought he looked rather fierce and just the type for the French Foreign legion.

Tall Fred had a very attractive smile. He was about the tallest soldier we had met so far, hence the adjective. It was after this dance that Beryl, who thought she was walking home with the Legionnaire, kept talking about Tall Fred whom she hadn’t properly met and asking who he was, arrived at the gate, to her dismay (or delight?) she found she had been walking home with Fred not Leslie!

Howard, who was a ship’s barber in civil life, got his nick-name because he was so very like a cousin of ours of this name. He was actually another Fred. The Army seems over-run with them (Freds we mean)

We also went to another dance on 17th August, but didn’t really know them, apart from having met them at the previous dance.

On the 24th August when Rose Bowyer was staying with us, we four girls and three boys spent an afternoon on the river in Cambridge We had a punt, took sandwiches for tea and had a grand time.

It was unfortunate that Leslie, who had been so good all the afternoon, while the other two boys had been trying to sink the punt by “rocking” it should fall in. He was trying to get on the bank from the boat when the latter wasn’t moored and it just sailed from under him and in he went! He was rather wet and came home for a hot bath and supper, but before getting home there were more adventures!

Three small boys in another punt spent the afternoon following our boat and trying to sink it. It was getting late and we were afraid of missing the bus home as all our efforts to return downstream were thwarted by these boys. Then Fred had an idea. He leapt from our punt to theirs, got hold of their mooring rope, then leapt on to the bank and there he sat holding their boat fast while we hurriedly paddled downstream.

When we were well on our way and out of reach of our tormentors, Fred let go of their rope (after having suffered much splashing from the boys) ran along the bank and rejoined us some hundred yards further down. Fred certainly saved us from missing our bus.

Leslie used to come in most evenings and one afternoon, the 8′ September, he took Monica on the river at Cambridge in a rowing boat. The other two never actually came to the house.

We saw Tall Fred on 12′ October when the convoy he was in paused for refreshment at the Old English Gentleman. We just had time to say “Hullo” and “Goodbye.”

A safe and happy voyage through life, lads!

What a wonderful time the girls must have had; as intelligent young women and with a brother serving in the RAF, they must have listened anxiously to the BBC news on the wireless, and read the reports from the Front in the newspaper, but they were young, and lovely and enjoying their life!

The confusion of Beryl over the identity of the young soldier who walked her home is understandable because it would have been a black-out, no street lights, no lights allowed from windows, it really would have been very, very dark! Going on the river was a regular and common thing for Cambridge folk… forget the University, they are ‘gown’ think of us Cantabrigians, we’re ‘town’!

The photos were actually taken the following year, the summer of 1941, and I don’t know the identity of the young man paddling them along!