In the new year I am going to be giving a talk about writing family history – not the researching but the telling the stories of people who came before, our ancestors.

I’ve travelled around quite a bit visiting different places that my family came from.. this is an account of a trip to Sussex:

I know some of my ancestors come from Sussex, and I know some of the come from East Preston, so I stopped in this lovely little village not far from the sea and had a look round.

Saxon settlers farmed the area and the sea was a great source not just of fish to feed their families but salt, which was needed for preserving food. The village is recorded in Domesday as Prestetune, meaning the priest’s farm or settlement and at one time its lord was  Wulfeva who didn’t even live here!  However, by the 12th century there was a manor belonged to a lord named Milliers and for some time, though several hundred years the village was called Preston Millers. The Milliers probably founded the church, dedicated to St Mary the Virgin; it is about 12th century, and is built on the ancient Saxon burial ground. 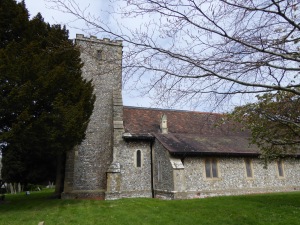 It is a pretty little church; the west tower dates to the fifteenth century in a perpendicular style. Inside (which I didn’t see) the nave is very old, twelfth century, the chancel is thirteenth century in an early English, and the south aisle and vestry were built in 1869 in the same style.

East Preston is in the Arun District of West Sussex, about half way between Littlehampton, where my grandfather was born and his family had lived since the 1840’s, and Worthing. However lovely and peaceful it looks today, for some residents in past times life was extremely hard; in 1792, a union workhouse was erected; the building was extended in 1806 which speaks of terrible poverty and deprivation. It closed in 1869.