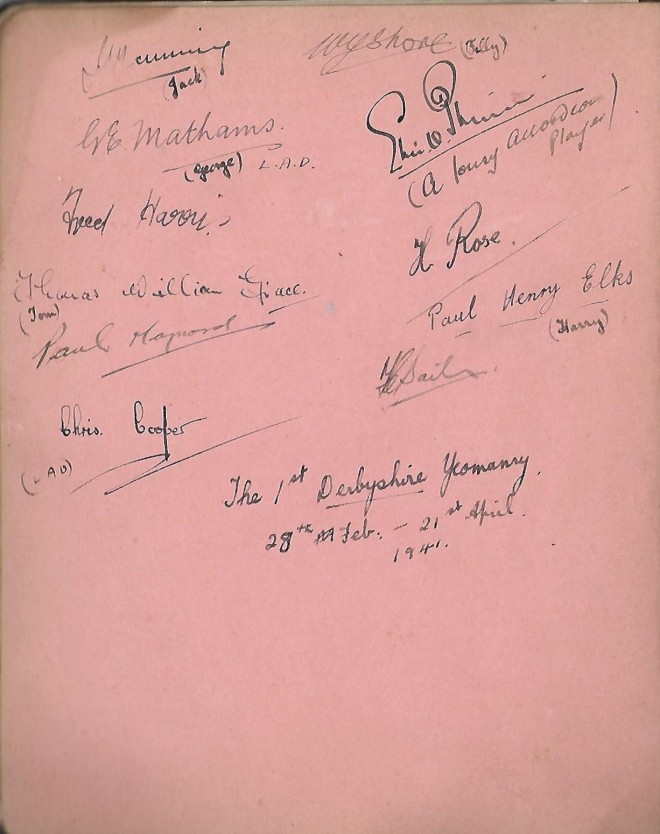 My mum and her two sisters inherited their mother’s autograph album which she had been given for Christmas in 1905. Thirty-six years later, during the 2nd World War, their little village of Harston was a staging post for soldiers before they were sent abroad. Some of those young men would have gone and never returned, and knowing that their future was so very uncertain, grandma welcomed the servicemen into her home. Her husband, my grandfather who had served in the first war, joined up again, and her son, my uncle was in the RAF.

The three sisters kept a diary of these years, with stories of the different ‘boys’ they met. It was all so innocent, and the family who were by no means well-off, shared their rations to give the young men a little home away from home.  In February of 1941, The 1st Derbyshire Yeomanry, were stationed nearby, and some of the men signed the girls’ autograph book.

I’ve tried to find out a little more about them… if any of them are still alive they will have passed their century.

I must read the diary my mum and her sisters left and see if I can find out any more about these young soldiers.

I’m sharing the page from the autograph book… if anyone can interpret the mysterious accordion player’s signature I’ll be very interested!