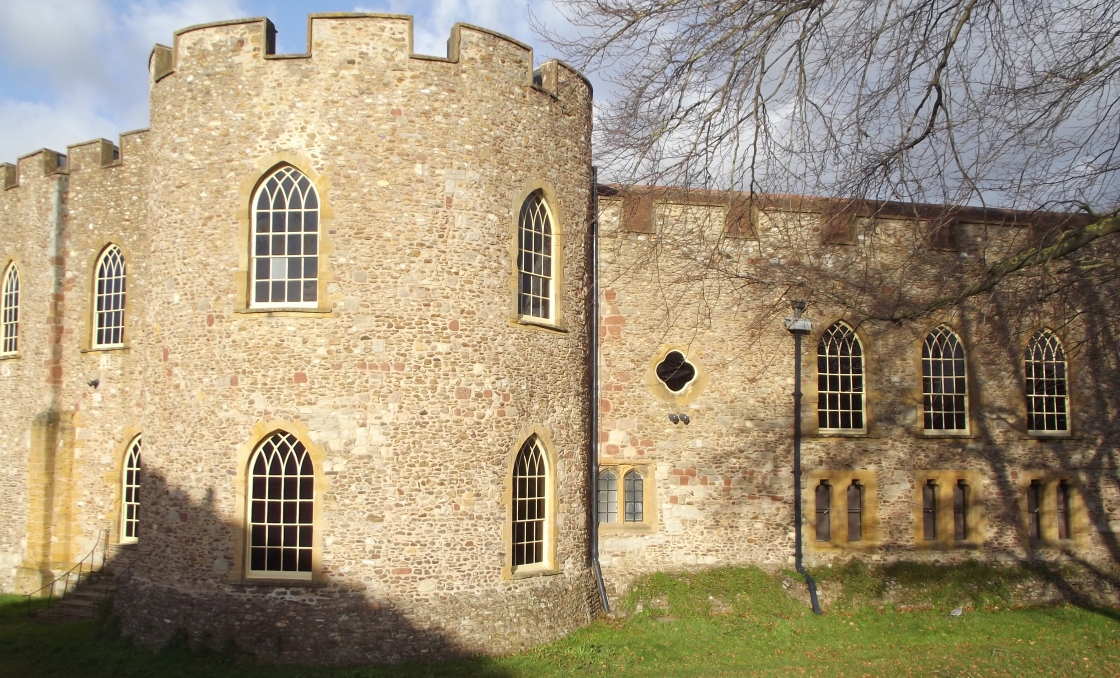 A week or so ago I wrote about the tragic and brutal murder of Eliza Lace by her husband William in front of two of their four children at their home in Blagdon on the Mendips. This happened in 1872 and William was hanged four months later in Taunton Gaol and I believe it was the first execution to take place behind closed doors.

It’s a strange story and I can’t find more details about it at the moment; it seems William and  Eliza had a normal marriage, he was a good husband working in the local mines or quarries and was known to be ‘an excellent character for sobriety and good temper.’ No-one seems to have known that he had a violent side, and they had the four children aged between fifteen and less than a year when the terrible event took place. Eliza too was said to be of good character.

On Monday, 22nd April as William left home for work at about seven, as usual, he told his wife he would be late back and not be home until eight that evening. No doubt Eliza was planning to have his meal ready for him at that time, but he came home earlier and seemed cross – ‘expressed some vexation’ that his dinner was not on the table. The next day, Tuesday 23rd April, William left work in the evening about five o’clock; I don’t know if that was earlier than usual but it was only a mile to his home, which should have taken at the most twenty minutes. He arrived home at seven, and I wonder where he had been during that time.

As he passed a neighbour they exchanged a few words and William seemed perfectly normal. As he got to the garden gate of his house he met his eldest daughter Elizabeth and asked her where Eliza was. She replied that her mother was in the house, and William is reported to have said “I’ll make you both prove your words,”  It was a strange thing to say and Elizabeth left him and went off on her errand. William went to the house and met his second daughter, Sarah and his words to her must have been terrifying, yet unbelievable – if William really was the man of good character as he was reputed to be. He said “I’ll kill all the d- lot of you.”

William went into the house where Eliza was with James and teh baby.

“You’ve been out in the hundred acres with a hundred fellows a month ago!” he shouted.

“I don’t know what you mean,” Eliza replied.

“I’ll let you know. I will kill you,” and with that he launched a vicious and unprovoked assault upon her even though she had the baby in her arms, throwing her against the dresser.

Eliza managed to escape and ran next door to the neighbouring house, all part of the same building. William followed, as did Sarah, into the home of Mrs Phear who was heavily pregnant.

There followed a complicated series of events involving several different neighbours and despite what they witnessed and must have heard, they believed William when he said he would not hit Eliza again. it seems extraordinary that no-one interfered. If William really was a man of such good character, would not someone have tried to reason with him, or tried to protect Eliza? One neighbour, eighteen year old George Herring saw William knock Eliza down and kick her four times. Eliza went to the Herrings house for help, but they shut their door against her. George had already seen William knock her down and drag her round the corner – why did he do nothing to help? Why did his father and he together go to her aid? Why did they not let her into their house? William can’t have been the good character, the Herrings must have been frightened of him if they would not even go to get help as ten-year-old Sarah did. What did the Herrings do? They went into their house and had supper.

Eventually Eliza ran home and William, accusing her of ‘newsing’, gossiping, struck=k her down in their own garden and kicked her. Sarah bravely grabbed the baby and ran back to the neighbour Mrs Phear, then leaving the baby ran to get help.Sarah ran to a farmer, Mr Wood, who sent for a surgeon (doctor) and a police constable and then went down to the Lace’s house.

Little Sarah ran back home, meeting her sister Elizabeth on the way, and no doubt frightened and full of trepidation, they went into their home. To their horror they saw their mother lying dead on the floor, no doubt covered in blood, her clothes virtually ripped off. They must have been terrified, and then their father picked up their mother and slammed her once again against the dresser.

“She’s only dead-drunk!” was cruel reply.

The story becomes a little confused, because then, or maybe earlier, William went next door to the Phears, who must have been terrified, He told them he’d killed his wife, and that although some men might kill themselves in this situation, he would give himself up to the authorities.

Mr Wood, the surgeon and the police arrived and that was it for William; arrested, kept in prison, tried, found guilty and sentenced to death. Even at his trial, in mitigation it was said that he was usually of good character and ‘for the defence it was urged that there had been no intention on the prisoner’s part to take life’. A savage beating and kicking over some time, throwing her around, even when dead, sounds very much like an intention to me.

As a postscript, ‘the learned Judge, who commented severely on the conduct of the neighbours’

My featured image is of Taunton Castle; this is not where William was held and met his death; the old jail is now part of the police station.