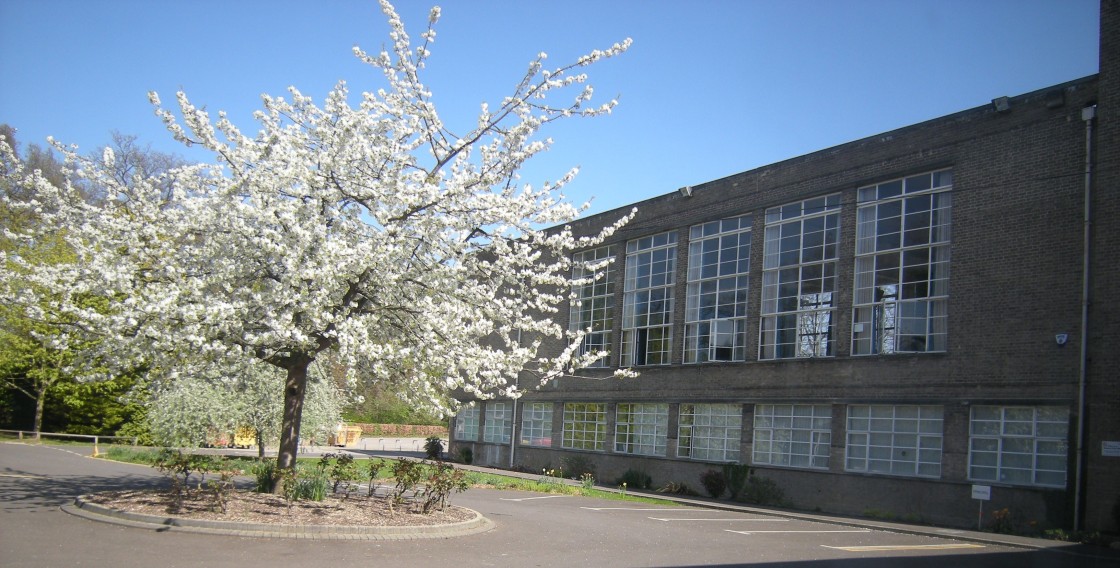 Day 3 of my blog-s-day-for-30-days challenge, and it already feels like a lifetime! Today certainly is a challenge with this title, ‘creativity’. I had a vague idea and as I wrote somehow it grew, so this is part one, and I will complete it tomorrow! I have used a picture of the school I went to as my featured image, but my story is completely fictional except in some of the physical details of bits of my imaginary school. We did have a lovely art teacher, who was very young and full of life, but she isn’t Miss Porter, and Miss Silver is a person who only exists in my imagination.

For some reason, Art was called ‘Creativity’ in our school; Patience, aka Patty and who wasn’t very patient at all, called it creat-crapity which somehow stuck, even after Lyndsey blurted it out to Mrs Goodman who was interrogating her about something. The name actually spread to the lower forms, and I even heard Miss Buchan drawl it out to another teacher and then give her rasping laugh. Rumour had it she smoked cigars, although she had only ever been seen smoking fags in the staffroom.

Miss Porter was our ‘creativity’ teacher and we all knew she thought it was a ridiculous name because she used to say things like. ‘Well, women‘ – she called us women which thought was amazing as we were only thirteen and fourteen, – ‘well, women, art homework is draw a tree which looks like something else, it can be any old damn tree, from the park, from your garden, from your imagination, but a tree which looks like something else.’

All of us liked Miss Porter best – not just the ones who were in love with her and drew hearts with their initials entwined and bought her small gifts but were never brave enough to give them or even leave them on her desk. I think we liked Miss Porter not just because she was a good teacher, but she was kind without being soppy, and above all she was fair. Also she did like a good joke and there was often laughter in her class – one of the few places in school where it happened during lesson time.

We had double Art/Creativity/Creat-crapity on a Monday afternoon and everyone, even if they weren’t any good enjoyed it. We’d go up the stairs to the short corridor where the two art rooms were, one on the left as you walked down, then the big one at the end. Somehow, to Miss Silver’s fury, the big one was Miss Porter’s – Silver had been at school longer, but she had been timetabled in the smaller one.

We were going to do a new project, Miss Porter told us and she was unusually serious. There was to be an art exhibition, it was to be displayed in the foyer and every girl in the third year had to produce a piece of art or pottery to be displayed. It was for a special event celebrating the thirtieth anniversary of Miss Farthing as our headmistress. She’d been at the school longer than that, ‘since Noah were a lad‘, said Joan in her Lancashire accent in a rather loud whisper, and we all giggled, but Miss Porter didn’t for once. She didn’t tell us off, just waited for us to shut up, and then told us it was really important that our work – painting, sketch, charcoal, whatever, was of the highest standard – I don’t want you to let me down, women,  she said. The fact that she said that to us wiped the smiles off our silly faces. The usual sunny atmosphere of her classroom chilled and we went to our places to spend the next fifteen minutes planning.

For some reason it was really important to Miss Porter that we did our absolute best. Out of the class we speculated on what it could possibly be and rumours were rife, I even heard girls from the upper school talking about it on the bus home. I usually cycled to school but I’d ridden into a ditch and pranged the front wheel so Dad had taken it to Wispy Clarke a friend of his to repair. Was a relative of Miss Silver’s judging our work? Was Miss Porter’s attitude to us girls disapproved of and our work was to be judged to somehow get at her? No-one knew but suddenly the free and easy atmosphere in the art room changed.

“You know the subject is Creativity,” said Miss Porter the next time it was art, just a single lesson on Wednesday morning. “So let’s be creative. I’ve had a look at your rough ideas, and so far it promises well, but I think some of you are lacking that adventurous spirit I want you to capture in your work!” she said, and all of us, I’m sure, silently resolved to do our best for her.