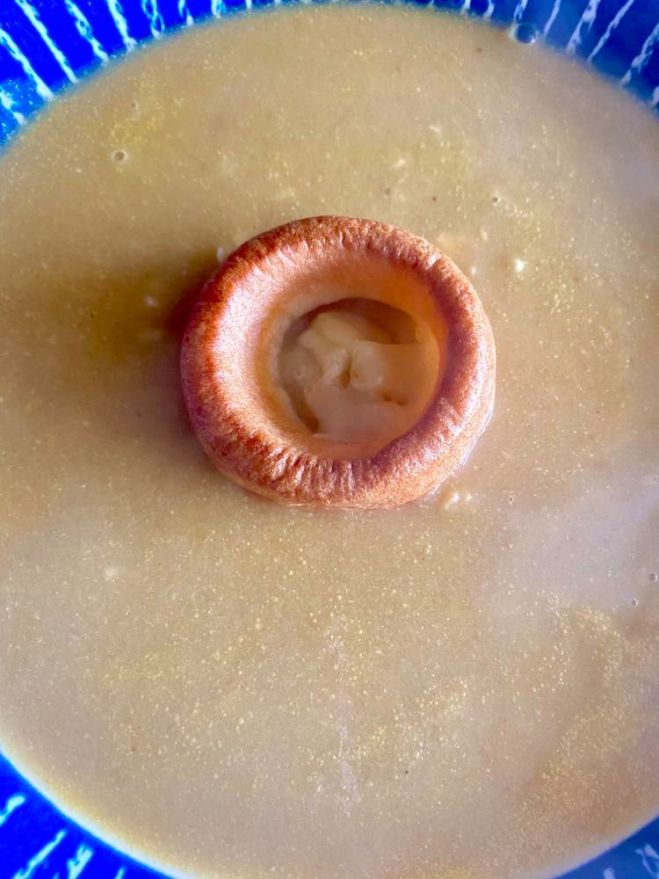 We’ve been having more adventures with the soup making; a few days ago I mentioned we’d bought a soup maker and were enjoying great success and lovely soups with it. I wrote about what we have been eating, and the soups we have made so far. Sharing this I had some great comments and really delicious sounding suggestions, including these from friend and from cousin:

I was intending making roast red pepper soup, but I have been forestalled by these ideas. I have bought a giant celeriac (good grief, however much soup do we think we can eat/drink?) I have bought leeks, but both of these were also put to one side as I took up cousin’s suggestion of roast dinner left-overs. We had roast chicken, baby carrots, roast potatoes, roast parsnips, sweet potatoes, cabbage, batter puddings and gravy of course. I chopped up all the leftovers except of course the batter puddings – having learnt the first time I had a soup maker that chopping things small might take slightly longer, but saves the soup maker from being so stressed it jumps around and throws its plug-in thing out of the socket. I put everything including the gravy and a little extra water into the s-m (soup maker) switched it on and left it to do its thing. Meanwhile I heated the oven and when the soup was within a gnat’s whisker of being finished, I put a couple of the mini batter puddings in with a small amount of cheese in them – I was thinking of French onion soup with it’s cheesy croute. Soup finished, poured into bowls, cheesy batter pudding/croute floated on top at the last minute and it was ready.

I have to say it was a triumph! This was the first time we made soup with anything other than just plain vegetables, but it really showed how versatile the soup maker is. I’m a fiend for saving leftovers which usually sit sadly in the fridge with no-one wanting them. No more! Abandoned leftovers are a thing of the past, now all will be soupified and consumed!