What a great read!

As you may have seen me mention before, one of my favourite authors is Damien Boyd who writes the Nick Dixon series of books set in Somerset. Nick Dixon is a Detective Chief Inspector based in Bridgwater, where, coincidentally someone very close to me also works – I always tease them that they might bump into Nick and his colleagues one day! Damien’s latest novel is ‘Dying Inside’ and I have been very lucky to be able to read it already – and it’s absolutely gripping, I stayed up way too late reading it, and then as soon as I was awake and slurping my early morning tea I started again and stayed in bed until I’d finished it.

This is the blurb:

Newly-promoted DCI Nick Dixon is stuck behind a desk when the peace of the Somerset countryside is shattered by a spate of sheep killings. Dixon recognises a sinister pattern: the animals have all been slaughtered with a crossbow, the power increasing with each kill. It seems whoever is responsible is practising, but for what?
Then the owner of a yacht that capsized on a suspected drug run is found dead, pinned to a tree by four crossbow bolts. Convinced that the killing is a gangland execution, the organised crime unit take over the investigation.
Dixon is sure the motive lies elsewhere, but is forced to watch from the sidelines – until another body is found.
Leading a major investigation team at Avon and Somerset police headquarters, and with internal politics threatening to thwart him at every turn, Dixon must find the murderer before he kills again. And again…

I won’t give any hints as to what is behind these dreadful and brutal murders, except that it’s not what you might expect and there are most unusual motives behind the killings. One thing I will mention, there is a financial aspect to the crime and I had to concentrate to follow all the ins and outs of the story. A story which really engages in different ways is so much better than one which just slides past with no challenge! This is the eleventh in the series, so many of the characters, with their backstories, will be familiar if you’ve read the previous stories; if this is the first Nick Dixon book you’ve read, enough of the history is lightly painted in to make sense but not so much it will spoil aspects of the other novels.

I was reading another police procedural recently and some of the characters were just stereotypes – and not even realistic stereotypes; all old people were virtually geriatric and wearing the sort of clothes I can vaguely remember elderly relations wearing when I was a child – most retired folk these days seem active and busy, fashionably dressed (ok, fashionably for their age group!!) Younger people were virtual caricatures.  In Damien Boyd’s books the characters  are people you would recognise, people you might know, or pass in the street, or see sitting at the next table in a restaurant – individual, real, well-observed.

One aspect of writing which I don’t feel is my strong point is location and scene, and one of the fun things about Damien’s books is that if you know Somerset, at all you will recognise his locations, they seem very real and in fact they are real! Part of ‘Dying Inside’ happens in our village so I know exactly where the Yacht Club and the Marina are, another scene takes place in a house in the road where a friend lives so the description of the views the officers can see are ones I know very well! There was a programme on TV about Hinkley Point C, the new nuclear power station which is being built just down the coast from us – I felt as if I knew something about it already as DCI Dixon and his colleagues visit it in ‘Beyond the Point’.

Here is a link to Damien’s site where you’ll find details of the books as well as a little background to them, information about Damien and other links:

If you look closely, you might even find a picture of me enjoying his talk at the Weston Literary Festival! 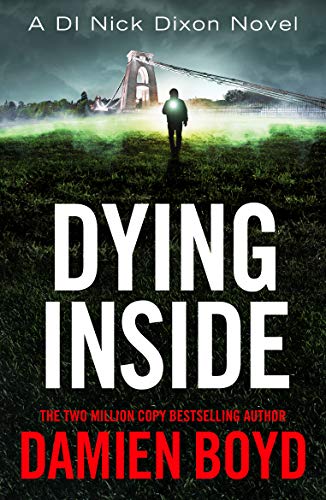