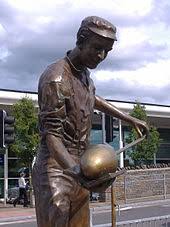 A blameless and interesting town

I’ve been sharing interesting snippets here from John Rutter’s 1929 book ‘Delineations of the North West Division of the County of Somerset’ and I happened to mention to my friend Richard (see below) what a good book it is and how fascinating. Richard lives in Nailsea so I sent him this:

to the eastward of the village, and was lately an extensive tract of rough land, covered with timber and underwood, with the appearance of having formerly been a forest or chace; but it has been enclosed and brought into cultivation. This tract, originally to all appearance poor and worthless, is extremely valuable in consequence of a bed of excellent coal which is found beneath its whole extent, and is worked in several places by shafts or pits, varying from fifty to seventy fathoms, and in some instances has been worked underground to the distance of a quarter of a mile from the main shaft.
The firm of Lucas and Co. Bristol, have increased the importance and population of this district, by the establishment of an extensive manufactory for crown glass; and  the buildings connected with it are inhabited by a numerous colony of persons in their employ, forming a distinct village of considerable extent.

It made me think back to something I wrote about here a couple of years ago about my own experiences of Nailsea:

I have to say first off, that Nailsea is a totally blameless and interesting town in North Somerset. Over 15,000 people live there – in the past many of them were involved in coal-mining, and then in glass-making, however now people do the same sort of jobs people do everywhere, and no doubt many commute to work in Bristol which is only a quarter of an hour away by train. My friend Richard has written about the town and here is an excerpt from an excellent post:

It is built on a small syncline which makes an island in the surrounding low-lying moors that are drained by rhynes. It is overlooked by a small ridge of high ground to the North that is called Failand Ridge, which runs from the sea at Clevedon to Bristol where it is cut through by the Avon Gorge. Cadbury camp – an Iron Age hill fort – is on this ridge overlooking Nailsea.

Nailsea has some interesting features and a church, Christ Church, built in 1843 by George Gilbert Scott, the first in a line of architects of that family name, and another much older church, the fourteenth century Holy Trinity Church.

However… whenever I come to Nailsea it’s as if a curse falls upon me, and I seem doomed to wander the roads and by-ways getting ever more confused. I’m sure extra ways appear and disappear, I’m sure the sun changes its position in the sky, I’m sure highland inverts and becomes low, and vice-versa, I’m sure someone spins the sign-posts, or in a WW2 time-warp they are removed altogether.

it started when I was at work, and there was a training centre opened in an old school which we had to frequently visit or go to meetings in… I was always late, however early I started as I could never find the wretched place – and then I was late home because I couldn’t escape it!

Now two writing friends live there – one lives on the outskirts so I take a left off the main road, and then it’s an easily recognisable right turn. The other lives somewhere else, and every damned time I go I get lost – even the satnav gets lost.

Today we were meeting in the second friend’s house – and guess what? I arrived there early having driven straight there, no diversions, no missing turns, straight there! However, I really tempted fate by mentioning to my host that I’d managed to find my way with no mistakes… so on the way home… when I passed the same pub for the third time, and when I realised I’d driven along the same road in opposite directions twice, I realised that yes, the Curse of Nailsea had fallen upon me. I stopped and turned round in a farm gate – yes, I was out in the countryside… and headed back into town with grim determination… and this time, I managed to escape…

Oh and another thing… as well as changing the geography, the position of the sun, the topography, the signposts – between Nailsea and the main road back to Weston, some shape-shifting goes on, so the houses I passed were totally different from the last time I drove along the road… I would have turned back and headed back into the town, but I realise it was another aspect of the Curse…