Some time ago – seven years in fact, I write about the London Shoe Company; someone has very kindly commented on my post, mentioning that she had inherited a pair of shoes made by this company! I began to have a footle about seeing if I could find out more about them and came across an article on Trove, a brilliant Australian site with a massive library of newspapers and journals from the past. I found three articles about shoes and boots from the London Shoe Company, from 1906, 1914 and 1934. At that time the company had premises in Regent Street in London, number 260. When I originally wrote about it, the advert I was looking at gave the address of their premises in Queen Victoria Street and New Bond Street in London.

“White whale” boots are the latest novelty in men’s footwear. The boot has been produced by the London Shoe Company, and is made from the hide of the white whale, which is found in the Northern Atlantic and the Arctic Ocean. The white hide is tanned black on its arrival in England, the texture of the hide then resembling gutta-percha. For durability and water-tightness the while whale boot is claimed to be unrivalled, being especially suitable for sportsmen. “For fishing, shooting, and climbing the boot is without equal,” said the manager of the London Shoe Company to the “Daily Mirror.” “It is probably the ‘longest-lived’ boot one could possibly have, being guaranteed for four or live years’ wear. The whale hide is light, too, a single boot weighing 1lb. 12oz. “A pair costs 50s., and although most people would call this very ex-pensive, we have sold over a dozen pairs to-day, which is a large sale for such an expensive boot.” I The nations of Europe are as little inclined to follow our lead in disarmament as they were to imitate our policy of free imports. It is a highly dangerous proceeding to countermand battle ships on an assumption of this sort,—”Manchester Courier.”
***
The Armstrong Motor and Cycle Agency Co. can supply you with anything from a spoke to a motor car. Model “A” Armstrong, one of the best cycles on the market, can be procured for £17, and model “B” for £10. Other special lines they are putting forward are the world-famed Union oil engines, and a real good stock of guns, ammunition, etc. Address – Market-street, Fremantle, and Hay-street, Perth-The adoration of fortissimo top notes of centuries in cricket matches, of Gordon Bennett record-breaking, of stentorian oratory, of Samson men and mammoth ladies, of thinking in continents, of multi-millionaireship—this defiance of perspective and of the law of gravity permeates the British mind.

The last ‘Queen’ describes novelties in shoes now being shown at the Lon don Shoe Company, New Bond-street. Most prominent is the ‘Salome/’ made in black suede, with Louis (heels, its chief feature being the ankle band fastened with handsome paste ornament. The ‘Ruchette’ is distinguished by the ruched trimmings, to which it owes its name, down one side and over the instep, where it fastens with a paste stud. These are made in patent calf black or white suede and champagne kid. The ‘Lavalliere,’ in black bro-cade, essentially a summer shoe, is al ready popular in England. Some ‘dreams of summer gowns,’ by Mrs Evan Nepean, comprise a ‘copper pink silk muslin, -with draping of brown crepe de chine, the brown of a mature mushroom’s lining, the copper pink gleams through warmly, just toned down by a sash of Indigo blue, with round copper bulb fringe. Another gown suggested by a bowl of forget-me-nots ; A little thin cotton voile frock, in ivory, with the flowers all over it in dull far away blue (‘celeste’ is the word in Italian), with a delicious broad sash over the shoulder, spreading out like a waistcoat, and tying in a big heavy loop almost in front, of grey green-like for get-me-not leaves, and a little touch of the mauve pink of the buds in a little tulle collar and folded vest.

It is good news to know that metal buckles-the nice, upstanding kind are coming back into fashion again. Many of the news models shown by the London Shoe Company are adorned in this way. Bows, too, are creeping back into the picture. They are seen most often on demi-evening shoes-the kind one wears with cocktail frocks. Tie shoes are your best bet if you are sensible about selecting shoes with enough support for walking. They are being shown in more guises than ever by all the leading shoe shops. Combinations of colors and materials appear rather more often than plain effects, particularly in tie shoes.
For actual country wear brogues, ghillies, and good stout Oxfords have no peers and no competitors. Ox-fords of the less strenuous variety, however, have been somewhat lightened and feminised. They are lower cut and the collar hugs the instep with a slightly more curved line. 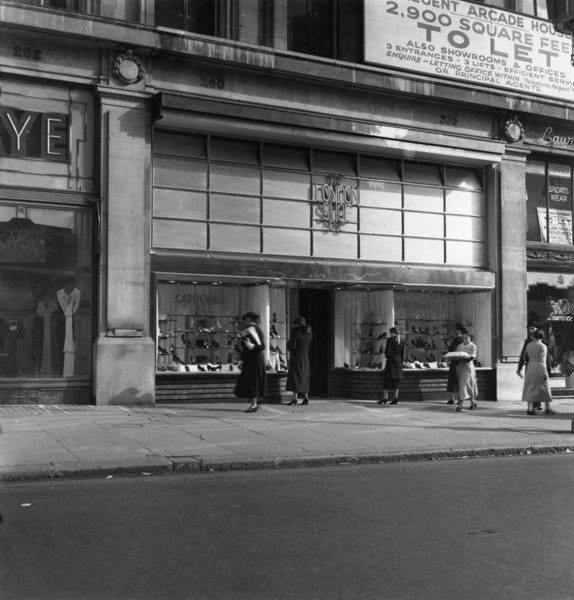