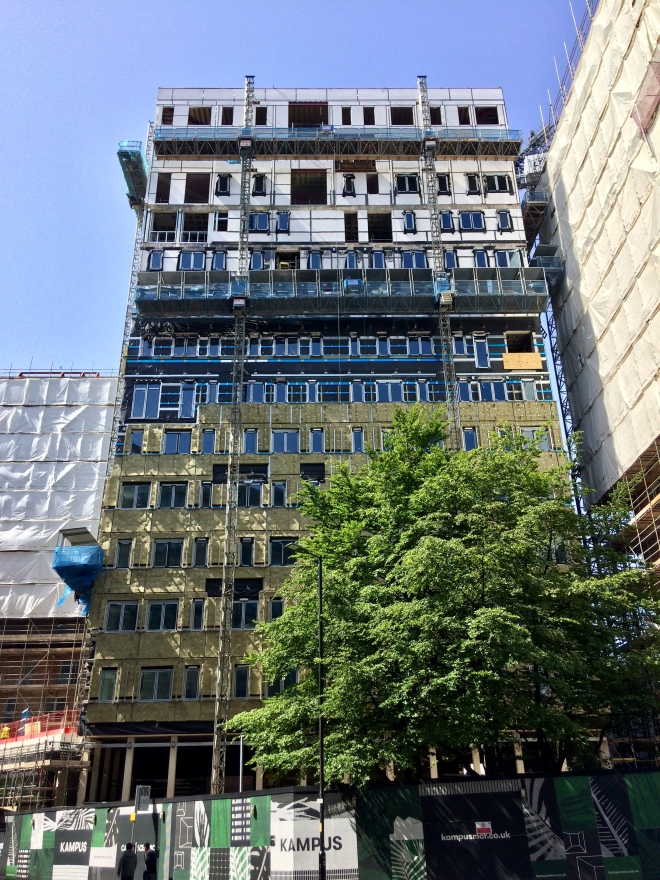 I’m continuing with my story which I first wrote a couple of years ago, Here is a link to part 1 if didn’t read it yesterday, about Livia returning to the Polytechnic she went to many many years ago and finding it much changed and in a very sorry state:

Livia had returned to the car park, put more money in the machine and then left; she was feeling nostalgic and she went back to what had been Cocomin. There was a small café on the bottom floor of a new office block which replaced an old Victorian building which had housed  the old fire station round the other side from the college. She was amused to see that this new café was called ‘Burt’s’ – the owner must have known there was once another café in the old building run by a Hungarian couple, and he was Burt.
There were no sausage or fried egg sandwiches on the menu, the eighties didn’t survive that well here. She sat on a tall stall by the window, leaning her elbows on the counter and staring at her old alma mater. She took a sip of coffee and for no reason remembered Arman. It wasn’t that she didn’t ever think of him, she did from now and then, but as a memory of a distant time… Now he was so vivid in her mind she almost felt she could turn her head and see him sitting beside her. In fact, she had forgotten that she first spoke to him in the old Burt’s.
There were bench seats all round the wall with red plastic covers, and the tables had oil cloth, wipe clean, but so wiped clean by Rosa, Mrs Burt, that in places the roses that patterned them had all but vanished.
How could she have forgotten that first meeting? She had arrived with her flat mates Mitch and Jim, and having ordered she slipped behind the table just as Arman had slipped behind the next table so they bumped each other as they slid along the worn red plastic. It was easy to get into conversation in those days, young and everything possible.
Now Livia sipped her coffee and explored her memory, gazing across at the shell of the building she’d once known so well. She had seen Arman before; everyone knew of everyone in the small college, but she had never taken much notice and knew nothing about him.
When she had first arrived as an excited and eager eighteen year old he had been there,  and when she returned in the second year, she’d noticed, him along with others so he was either in the second year too, or older. Having bumped into each other on the slippery red seats they got into conversation, as did her friends, Mitch and Jim, and his, Tony and Barbara.
They continued to bump into each other, chatting in the lift, sitting at the same table in the union, going to the same pubs and bars. And then one day Arman asked her if maybe she would like to have tea with him, proper Kurdish tea. She’d never had Kurdish tea, she replied… he came from iraq she’d thought, but fortunately she didn’t mention that.
“So will you come and have tea with me, Livia?” he’d asked, and she suddenly noticed his smile, the dimple in his cheek, his dark gentle eyes shining behind his glasses… suddenly she realised that she – she liked him, and hardly dare admit it to herself.
“Where do you live?”
“Here! The top three floors of Cocomin are flats for foreign students. I live on the twentieth floor – it’s easy to find me, flat 20, floor 20, 20-20!”