Recently we went on a tour of the Battlefields of the First World War; both of us had studied the history, read the literature, and the poetry, and had been more than moved by the dreadful suffering, the courage and the pity of war. We also had a personal reason to go; we wanted to find the memorial at Thiepval to my mother-in-law’s cousin, Horace Colgate, né Walter Dodd, who had died in 1916 on his eighteenth birthday. He had been adopted by his step-father, had four half-sisters and brothers, and was obviously much-loved by his family; how devastated his mother must have been.

I had followed the life of Alfred Prop, no direct relation of mine, but connected to my god-mother. He too had given his life for his country; he had been married but he had no children, and although he had nephews and nieces, I wonder if today there is anyone who remembers him?

Alfred along with 54,388 officers and men from United Kingdom and Commonwealth Forces who fell in the Ypres Salient and who have no known grave, is commemorated on the Menin Gate in Ypres. As the soldiers marched to war away from Ypres towards Menin, they joked that the last one out should shut the gate. This monument on that very road was built and named the Menin Gate. 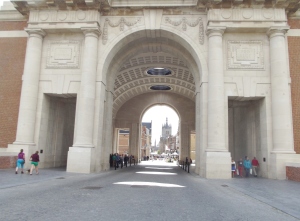 The Menin Gate Memorial to the Missing is one of four British and Commonwealth memorials to the missing in the battlefield area of the Ypres Salient in Belgian Flanders. Through the gate you can see the lovely town of Ypres, now called Ieper; it was totally destroyed during the war but has been wonderfully rebuilt..

She was a city of patience; of proud name,
Dimmed by neglecting Time; of beauty and loss;
Of acquiescence in the creeping moss.
But on a sudden fierce destruction came
Tigerishly pouncing: thunderbolt and flame
Showered on her streets, to shatter them and toss
Her ancient towers to ashes. Riven across,
She rose, dead, into never-dying fame.
White against heavens of storm, a ghost, she is known
To the world’s ends. The myriads of the brave
Sleep round her. Desolately glorified,
She, moon-like, draws her own far-moving tide
Of sorrow and memory; toward her, each alone,
Glide the dark dreams that seek an English grave.