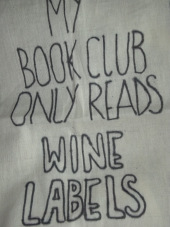 It was our book club party, last night and as usual I ran the quiz… Here are the first sixteen questions: