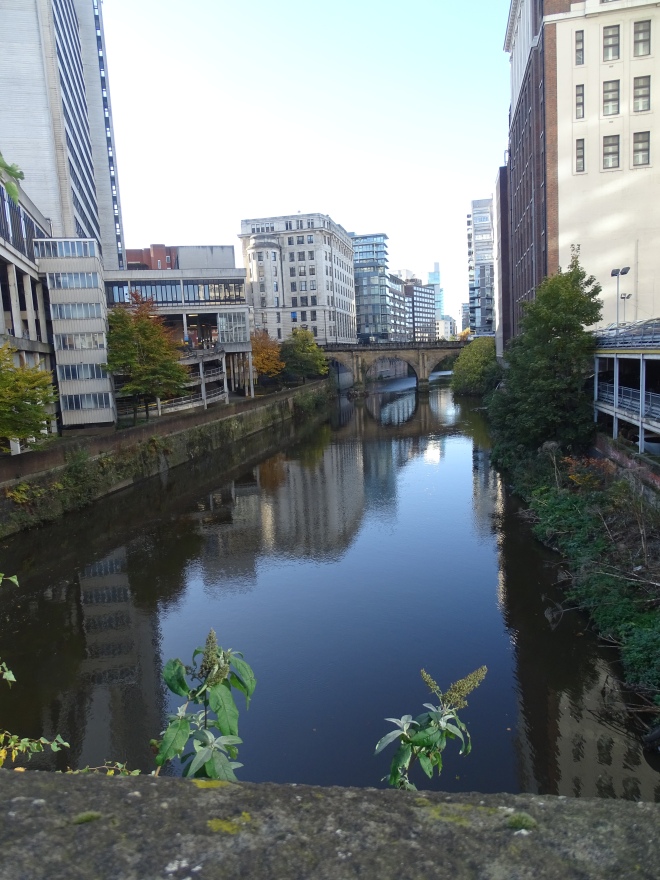 It was writing group this morning; the subject matter was of free choice so there was a variety of pieces presented… a true story about relationships in a family, a rather sweet romance involving a someone adopting a dog, the first few chapters – or maybe a prologue and first chapter of a novel, movingly describing bereavement, a reflection on night, thoughts about fire and two ‘friends’ meeting for coffee.

For the first time I brought some poetic writing I’d done, which I’ve shared here, about a photograph of the entrance lock to the Manchester and Salford Junction Canal. The photograph was by a friend of mine, and I was so taken with the image that I wrote about it – without having been to the location, and with only a vague idea of where the lock and the canal are. I read the what I had written, a prose piece, and then I asked the group for their comments on how I had tried to fashion it into a poem – or at least a poetic work.

It was very interesting and very helpful and I’m going to look at both pieces again – it seems they preferred the prose to the poem – which I confess, I thought might be the way. One thing I didn’t seem to properly communicate was that I was looking at a photo, not at the real scene, and what I wrote couldn’t include sounds, smells, I couldn’t touch anything, I couldn’t walk along the bank, I couldn’t properly see buildings in the background to know what they were – in the photo they were just a blur which I could only guess were a church, a mill, a hotel. I couldn’t expand the view to see up or down the canal or along the path because I wasn’t there. It wasn’t an imaginary visit to the place – it was a photo.

Someone said it was a word snapshot – yes, and that it had hidden depths in many ways – my work or the picture? My work I hope! There are things I can never know because it isn’t a memory, I wasn’t there when the picture was taken, I am observing the photo as i would a painting in a museum.

here is the prose I wrote which my friends preferred:

This is the entrance lock to the Manchester and Salford Junction Canal… the so-called forgotten canal; If you walk over the bridge, in either direction, you  descend to a path, towards the river,  The edge of the lock, is now punctuated by posts, link-chained. The water could be ice, reflecting like a mirror the pipe-line bridge, power cables unseen except on the surface of the lock.

It has hidden depths, in many ways; its history not remembered, its workers long forgotten, its builders who even were they?

What lies beneath, who knows.

The image is bordered by autumn trees, maybe a birch, golden and green, maybe a pine, dark, its branches lifting in praise or surrender, and beneath, wild foliage, surrounding a lamp, maybe a gate to Narnia.

Beyond the Irwell, the city, glimpsed beneath the metal arms of some feature of the lock gate, a tall upright structure, to lift, to turn, to open? The city beyond, in the fading distance has the dim red shapes of buildings, maybe a church, maybe a Lowryesque mill, maybe now a modern hotel Imagination can make of it anything!

This is the entrance lock to the Manchester and Salford Junction Canal.. 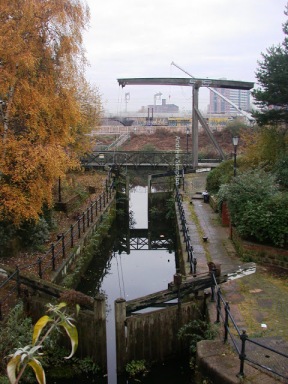 My featured image is of the River Medlock in Manchester, not the Irwell.

Here is a link to a really interesting page about the canal, and with loads of pictures:

…and here  is Andrew’s blog: