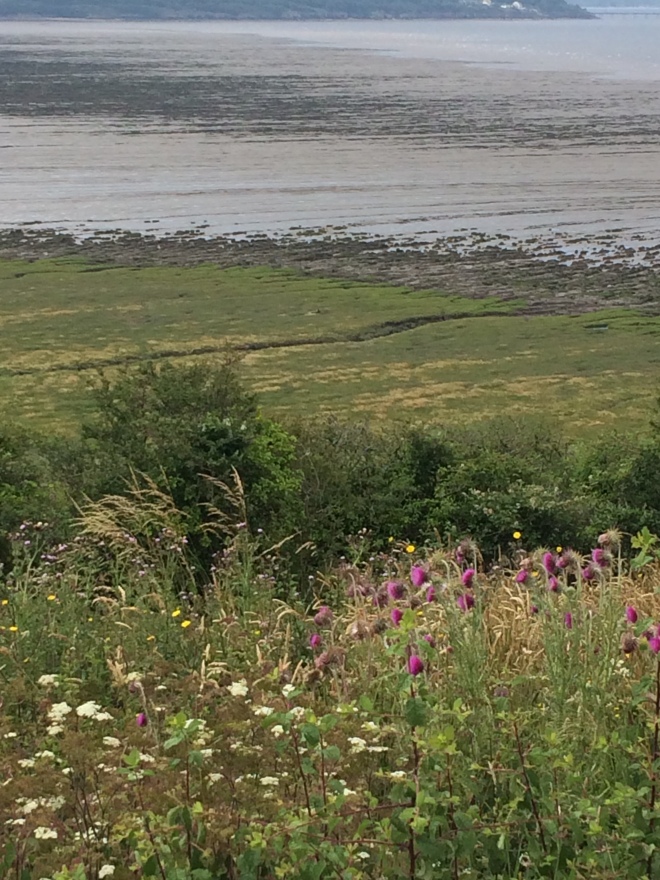 Archaeology and geology, My novels, Writing by LoisAugust 6, 2019

Many of my novels, including my Radwinter series, are set in a fictional area of an unspecified north facing coast. The main town which features is the totally imaginary Easthope, through which runs the River Hope. Further along the coast is a much smaller place, maybe awaiting development, Westope. Although I live by the sea in a small village a mile south of the seaside town of Weston-super-Mare, Easthope is not inspired by this coastline, this town, or anything around here. The original visual inspiration was the Causeway Coast in the north of Ireland, the name I took from an inspiring teacher I had.

What I didn’t think of when I chose the name was that on the other side of Western, at the north end of the next bay along, Sand Bay, is Sand Point, and an area of great geological inters, called called Middle Hope!  Originally the land between Sand Point and the southern promontory was mainly marshy and very wet, and even further back in time, was under the sea. There used to be a large area of sandy beach and then mud washed in from the estuary of the Rivers Severn and Avon. Now cord grass has taken root and slowly the bay is filing with herbage.

Middle Hope itself is, according to Wikipedia

sequence of carboniferous limestone is exposed, which includes thick volcanic tuffs and lavas, demonstrating Tournaisian carbonate sections. The site contains a Pleistocene-aged fossil cliff and shore platform. These features have led to the designation of Middle Hope as a regionally important geological site (RIGS). The raised beach of wave-cut platforms has been created by changes in sea level of the Bristol Channel since the Quaternary period. The arrangement of volcanic and sedimentary rocks, including the Black Rock Limestone, illustrates the events of 350 million years ago. The strata have been tilted and compressed during the variscan orogeny

I guess with many writer who make-things up – i.e. write fiction, sometimes there is a coincidental likeness to a real thing or person or event,  Sometimes names which have been invented turn out to belong to real people or places without any idea of copying or using an actual subject.

In the case of Easthope and Middle Hope, one is a sleepy, old-fashioned, seaside town, the other is a geological feature! My view is across Sand Bay from Middle Hope.