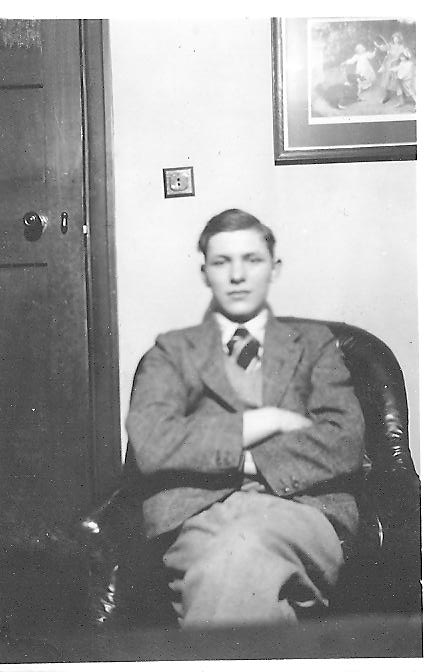 Here’s an updated version of a true story I wrote a while ago:

I’m not a vengeful person at all; I don’t mean I can forgive and forget… I forgive but I have the sort of memory that can’t forget. However, I have never been one to say ‘serves him/her right’ or to try and seek a way of getting my revenge on anyone! I might be very cross, and I might tell them so, but I would never do anything to deliberately ‘pay back’ anyone for a wrong they did me.

The Elsden family in general, are not like that. I won’t give any examples from more recent times but will tell you a story about my dad, Donald when he was really quite young, probably  nine or ten in about 1928-29. He was living with his parents and brother and sister in a pub in Cambridge called the Portland Arms Hotel. Now Donald was quite a mischievous boy, he got up to all sorts of tricks and was not always caught or found out. Reuben and Maud, his parents, were so modern in the way they brought up their children; they were strict but fair, and their children adored them and could talk to them about anything in a way which we arrogantly think is ‘modern’. Donald, Sid and Joan even called their parents by their names, rather than mum and dad.

Now when they were living in the Portland, they had a miserable neighbour, whose name I don’t know but I’ll call Mrs Brown. One day, Mrs Brown came to the pub and told Maudie that Donald had broken one of her windows. In actual fact, Donald had been out all day with his friend Sammy. Reuben came home from playing golf with his friends at the Gog Magog Golf Club, and Maudie told him about Donald breaking Mrs Brown’s window.

Reuben went up to Donald’s room, and asked him about it. Donald denied it, but Rue believed Mrs Brown and thought Donald was not telling the truth. This was the 1920’s don’t forget, so Reuben put Donald across his knee and gave him the slipper…. Donald was a pragmatic boy and thought to himself that he had done plenty of naughty things which Reuben didn’t know about so he might as well accept the punishment for something he hadn’t done rather than making a fuss and calling Mrs Brown a liar.

Later, Reuben found out that Donald had been away with Sammy for the day and couldn’t possibly have broken the window. Rue was distraught! He’d punished his boy for something he hadn’t done, and what was worse, he had not believed him when he was telling the truth! He was extremely upset and apologised to Donald – who actually hadn’t been that bothered about being slippered. However, the sight of Rue being so upset really upset Donald in turn. How dare Mrs Brown say such a thing! How dare she accuse him of something he hadn’t done which ended up with his own father being almost in tears?

Now here in the story is where the proverb ‘revenge is a dish best served cold’ comes into play. Donald was a crack shot with a catapult… he was also a keen fisherman and in those days lines were weighted with lead shot, tiny balls of lead.

A month after the slippering incident, Donald took his catapult, carefully positioned himself and put a small lead fishing weight through one of Mrs Brown’s window panes. It would have made a tiny hole, but the pane would need replacing. A few days later, maybe a week or two, he did it again with another, different window. Over the next few months, he carefully and strategically took out every pane of every window in Mrs Brown’s house with his catapult and lead fishing weights…  and all because Mrs Brown had really upset his father Rue.

Now I don’t approve of that, and I could never be like that, but it does give me some insight into the Elsden psyche… and I am an Elsden!