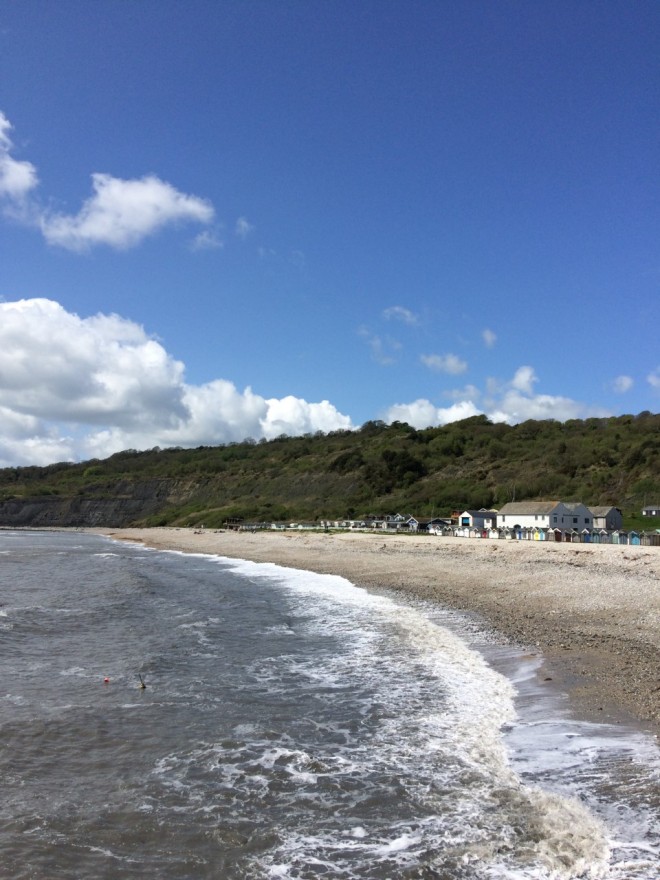 A pebbly beach is lovely, and probably for people not interested in sandcastles or beach games, preferable to one covered in golden sands. There’s something nice and very evocative of childhood holidays about crunching across the pebbles of a shingle beach, the sound of the waves drawing them out and tumbling them back. Of course, it’s better, unless you’re a small person or a dog to be wearing sandals or some other footwear. Wikipedia has a rather lovely definition:

A shingle beach (also referred to as rocky beach or pebble beach) is a beach which is armoured with pebbles or small- to medium-sized cobbles (as opposed to fine sand). Typically, the stone composition may grade from characteristic sizes ranging from 2 to 200 millimetres (0.1 to 7.9 in) diameter.

Another thing I find pleasing to the eye is roofs – or is it rooves, particularly tiled or shingled in the whole variety of

different flat, rectangular shapes laid in courses from the bottom edge of the roof up, with each successive course overlapping the joints below... held by the roof rafters and are made of various materials such as wood, slate, flagstone, metal, plastic, and composite materials…

Overlapping roof tiles, apart from metal or plastic which may be technically counted, are definitely not pleasing to the eye – are fascinating, it’s the patterns I think, the regularity and irregularity, the dapples of mosses, lichens, bird droppings, smuts, funny little extra-terrestrial looking plants.

These two things, a shingle beach, and a shingle roof, are very lovely and I’ve taken many photos. However, the word is associated with something far more horrid and something I’ve been too closely acquainted with over the last ten days which has been the reason for my absence from here.

Since I started writing here, I think I have only missed one or two odd days, every other day since 2012, or was it 2013, I have posted my ramblings here. However over the last ten days I’ve been absent – and the reason? Shingles! The horrible, nasty, miserable, beastly varicella zosta virus caught me unawares  yes, I have had shingles. In fact, I have been really lucky, horrid as it was it could have been so much worse, and now I am well on the mend although looking somewhat battle-scarred. I am not yet back in circulation because although it isn’t contagious, I just haven’t felt up to it, absolutely floored to be exact. I haven’t seen my friends, been to the pub, had a beer – yes, I haven’t been able to imbibe beer, just weak orange squash and tea.

In between dozing, sleeping and floating in a shingle-haze, I’ve read a lot. I was extremely lucky that just as I was up to focusing on anything, the excellent Damien Boyd published his latest book. It is set in Bridgwater and Burnham, two favourite towns just down the coast, and as you might guess from the title the events happen during the famous Somerset Carnival season. So here is my shingle-list: