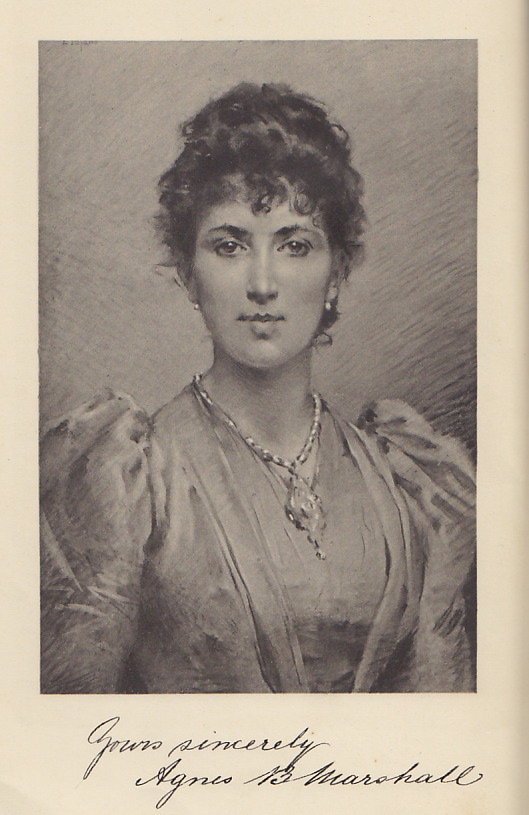 It’s ten days until Christmas Eve and I’ve been thinking ahead and what I could be doing to prepare for the big day. It won’t be the usual panic as we won’t be eating until the evening, and rather than a big bird for Christmas dinner I’ve decided we’ll have pie.

I think game pie might be nice, different, tasty and rather special. I have so many old recipe books and I’ve been searching through for a recipe and found one in ‘Mrs. A.B. Marshal’s Cookery book’ – that’s its title!

Agnes Marshall was a celebrity in her day; born in 1855, her particular forte was ice-cream and she has a whole section in the book I have. She wrote four books altogether between 1885 – 1894, ‘Ices Plain and Fancy: The Book of Ices’, ‘Mrs A. B. Marshall’s Book of Cookery’, ‘Mrs. A.B. Marshall’s Larger Cookery Book of Extra Recipes’,  and ‘Fancy Ices’. She also opened a cookery school, Marshall School of Cookery, in Mortimer Street London, published a weekly magazine called ‘The Table’, and sold cooking supplies and equipment. She was a real fore-runner of the celebrity cooks and chefs we have these days. Tragically she died at the age of forty-nine in 1905, after falling from a horse the previous year,  having never recovered from her injuries. Her husband took over her business, but it seems that without Agnes, the enterprise could no longer succeed. Unlike Eliza Acton or Mrs Beeton, no-one now remembers Agnes Bertha Marshall.

So this is her recipe which contains many things we could not now obtain, and I doubt we’d want them even if we could, e..g. cockscombs! Her ingredients are pigeon, chicken, tongue, ham or bacon, hard-boiled yolks of eggs, button mushrooms, pistachios, truffles, pate de fois gras, cockscombs, larks, quails, or ortolans.

I have written it as she has but whereas Agnes has paragraphs, I’ve spaced it as a bulleted list

Prepare a raised pie paste and with it line a No. 2 size French raised pie mould to scarcely a quarter of an inch thick then prepare a farce of mince as follows: