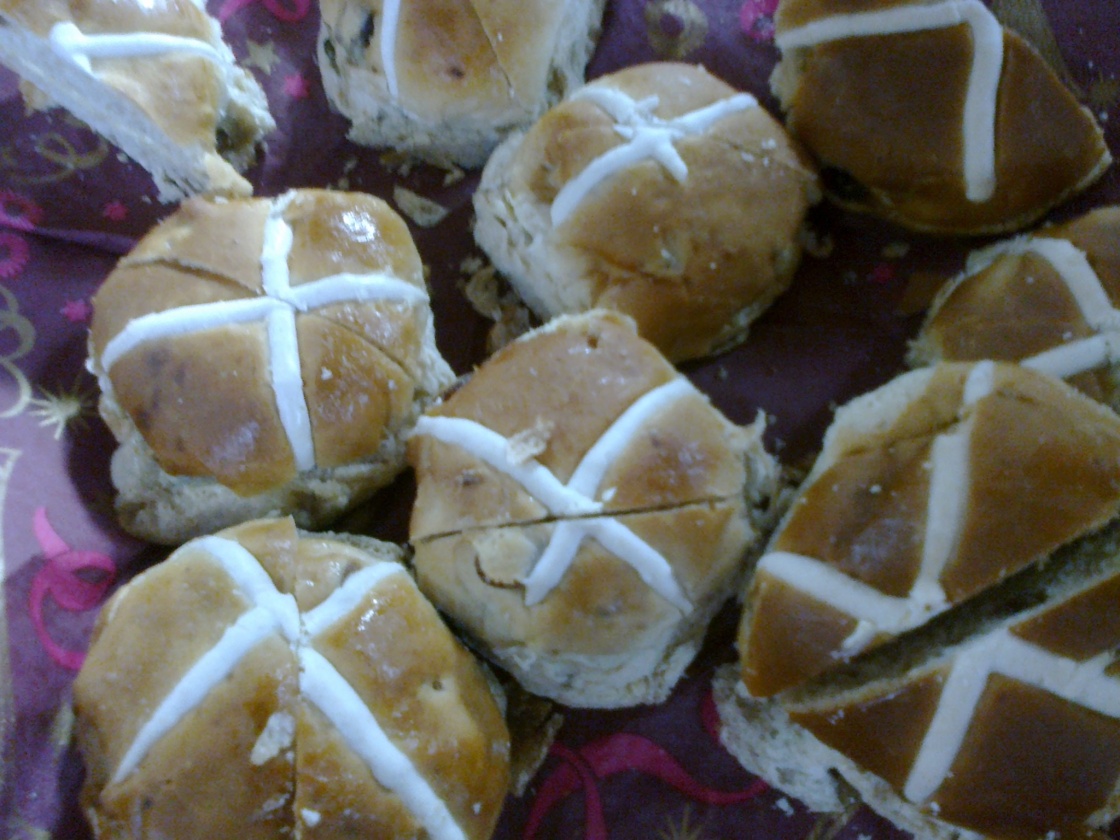 The story of hot cross buns

One of the great delights of Easter is hot cross buns; to my mind they should only be eaten on Good Friday, unless you are testing the different makes leading up to the date to make sure you have the best on the actual day…. ok so this does involve eating a lot of h.c.b’s (hot cross buns) with lots of butter, but it’s all in the interests of the perfect bun on the day! The only other time I think these seasonal specialities should be eaten is, if by chance you’ve bought to many and some are put in the freezer, or if you go to coffee with a friend and she offers you one…

The tradition of making special or significant patterns or marks on bread or other baked goods is very ancient and goes across all cultures. There was certainly Anglo-Saxon bakers making patterned or marked bread here in England, and through the Middle Ages so it continued. There was a mini-crisis at the time of the Civil war when the Puritans saw such things as Popish… however the hot cross bun survived. Thank goodness!

By the 1700s these buns were becoming more exotic and fancy, with different ingredients and speciality buns, much as they are today. Superstitions began to arise that buns actually baked on Friday could heal all sorts of ills, and if kept would continue to prevent or protect against disease. There was another tradition of nailing a hot cross bun to the kitchen wall… no doubt to ensure good fortune and plenty in the kitchen, but I have forgotten the precise details!

There is a pub in East London called the Widow’s Son; its name arises from an Easter tradition, and again I cannot remember the precise details in terms of dates. There was a widow with a son who became  a sailor; as he left to go on a voyage he told his mother he would be home by Easter and asked r to keep him a hot cross bun. She put aside a bun, but the son didn’t return. This was in the days of sailing ships and no speedy communication, so the following year the mother again put aside a bun,hoping that this year her sailor-boy would return. He must have met his end somewhere because he never came home, but each year a bun was put aside. Eventually the woman died and her lowly home was demolished and a pub put up in its place,which was named… the Widow’s Son. The first Easter in the pub, the landlord remembered the old woman, and put aside a bun, and it became a tradition that was followed each year. Sailors learnt of the pub and visited, bringing the traditional bun, and these buns were placed in a net hanging from the ceiling.

Today if you visit the Widow’s Son, you will be pleased to notice that the custom still continues!