Going round the back ways

it was a lovely day today and we went down to Taunton, our county town. I’ve written about it before, it’s a favourite place of mine… and i could imagine living there, it has a comfortable feel and interesting buildings. It’s not a big town, smaller than Weston-super-Mare where I live, it had a population of just over 61,000 in 2001… no doubt there are more people living here now though, thirteen years later!

It gets its name from the river which runs through it, the Tone, and there has been settlement on the site for thousands of years, but it was in Saxon times that the town became more significant. We go and visit fairly frequently, and we usually park in the Pig Market car park… which I guess is where the old pig market used to be! We walk through a rather uninspiring little shopping mall and then wander down the main street and have a look at the river; we might wander on a bit and then wander back. We might have a cup of coffee, and then have a look in a book shop or two.

Today, instead of walking along the main streets I took the back ways, cutting behind many of the shops; it was a beautiful sunny day and some of the old buildings glowed under the bright sky. The sun was low and it was difficult to avoid catching the shadows in the narrow streets.

There were lots of people walking about, cutting through the narrow lanes, and suddenly I came across the church of St Mary Magdalene, but from a different angle from usual. 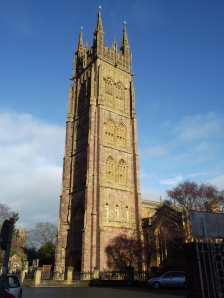 What a pleasant day we had!